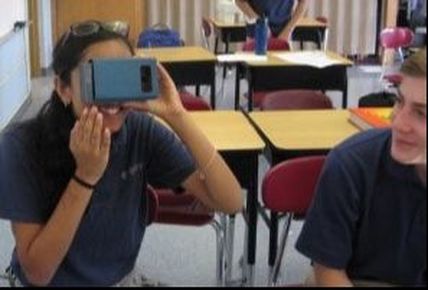 I began the school year feeling a little like Miss Frizzle. Though I don’t have a magic school bus I do have technology. My 8th grade class was introduced to virtual reality. I was a bit apprehensive since this was all new to me. I reached out and Gene Carboni, Lisa Wyatt, and Aaron Heintz came to my aid with advice and resources. With their support I was able to give my students an exciting experience the first week of school. However, I was still worried. Would the app work on the students’ phones? Would the
Wi-Fi signal be strong enough? Would everyone manage to get to the same reality?

Since this was the first time we used the VR goggles, the students had to put the cardboard VR goggle together. Some students found this quite challenging but it became a great opportunity for spatial reasoning and collaboration. The students then had to download Google Expedition app on their phones and make sure they were on the school Wi-Fi network. Now we were ready.

I gave an iPad to a student who didn’t have a phone and she became the leader, everyone else joined in as a follower. We explored the coral reefs, outer space, and the Alamo. Students were amazed at the sights and astonished that the leader could tell when someone was not looking where she asked.

The students enjoyed the experience and I was relieved all went well with no glitches. Now that the VR goggles are assembled, the app is on their phones, we can go wherever we like, whenever we like. Hopefully, in the future, students will be able to create their own virtual reality. Miss Frizzle and the Magic School bus? No, Mrs. Dorneman and Virtual Reality!

Karen Dorneman
St Katharine Drexel School
Karen has been at St. Katherine's for six years. Currently, she teaches 7th and 8th grade math and 8th grade social studies. In addition to creating challenging interactive lessons, Karen also enjoys tennis. She has traveled to watch the US Open, and is planning to one day go to Wimbledon. Whether you are looking for a tennis partner or some great classroom ideas be sure follow Karen on Twitter @doradorn. ​​
AOPTech would like to thank Mrs. Dorneman for sharing her wonderful experience with us.
​If you know of a teacher that should be featured next month let us know - Nominate a Teacher
​